Hunters possess a unique dichotomy. We enjoy the present moments immensely—and the thrill of the hunt is very high on our list—but we also have a unique connection to the past. We hold the traditions of our forefathers dear, and rely on the writings and experiences of the hunters that came before us. Of course, modern technology provides a multitude of advantages—many of which are used every day—but the older way of doing things appeals to many. This same principal applies to the choice of cartridges.

There are those who enjoy hunting with the traditional muzzleloaders (both flintlock and percussion cap), as well as the recurve and longbows in an effort to touch history. Centerfire cartridges have a similar niche, with many hunters—present company included—enjoying the nostalgia of the older designs and the history that comes along with them. The .375 H&H Magnum, .30-30 Winchester, .250-3000 Savage, hell, even the .30-06 Springfield are all over a century old. But the one that dates back the earliest—among the rifle cartridges still in major production—is the .45-70 Government. 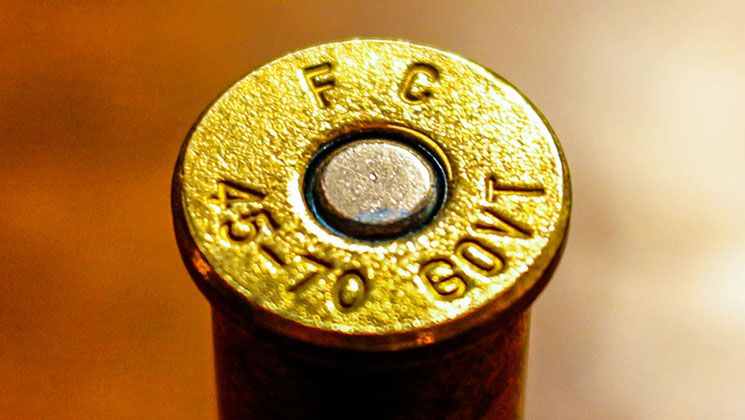 Among modern cartridges, the attributes of the .45-70 Government should have damned the cartridge into obscurity. It isn’t fast, it isn’t sleek, it throws a D-cell battery for a projectile, so why is it still here? Well, because it’s irresistibly cool.

It first saw military service in 1873, during the Indian Wars, and replaced the .50-70 cartridge as the U.S. Army’s choice. It was officially known as the .45-70-405—in the nomenclature of the black powder cartridges, where caliber-powder charge-bullet weight were named—and its accompanying Model 1873 ‘Trapdoor’ Springfield rifle proved to be a very accurate and effective combination. It remained the darling of the U.S. Army until 1892, when it was officially replaced by the .30-40 Krag, but remained in action even up to the Spanish-American War.

The 405-grain round-nosed lead bullet was launched at a muzzle velocity of right around 1,400 fps; it certainly wasn’t a speed demon by any means, but was a definite improvement over the .50-70 and the muzzleloading rifles that immediately preceded it. In the late 1870s, the load was revised to deliver a 500-grain bullet, which gave better long range terminal ballistics. It proved itself not only on the battlefield, but in the fields and woods as well. As a hunting cartridge, the .45-70 showed that it was perfectly suited for any and all North American game, including the dwindling bison. It was chambered in a variety of rifles, including all sorts of single shots—falling blocks, rolling blocks, etc.—and in the strong Model 1886 Winchester lever-action rifle. It makes a good short range cartridge for anything with four feet and a heartbeat, including grizzly bears. It’s undoubtedly heavy for deer, but I’ve seen my Dad use his Browning 1886 with good effect, with very little meat damage when compared to a 7mm or .300 Magnum.

Being an old case, it does have some drawbacks among the benefits. The .45-70 case is notoriously thin-walled, and therefore the pressures must be kept low. Having a good, wide rim, headspace and extraction pose no issue at all. The case length is just over two inches—2.105 inches, to be precise—so the action doesn’t need to be overly long. And, if the old loads were good enough to earn a reputation, the modern loads have only made a great cartridge even better. Of course, in deference to those late 19th century rifles, much of the factory ammunition for the .45-70 is a bit anemic, but in (specified) modern rifles, the .45-70 Government can be quite a raging beast. The modern Winchester 1886, the Marlin 1895, the Ruger No. 1 and No. 3; all will allow the velocities to ramp up, taking full advantage of the potential of the cartridge. As a matter of fact, several ammunition companies have made stronger cases for the .45-70, using thicker brass walls and a small rifle primer to further reinforce the web of the case. In this guise, the 400-grain bullets can attain the 2,000 fps mark, making it a horse-of-a-different-color. 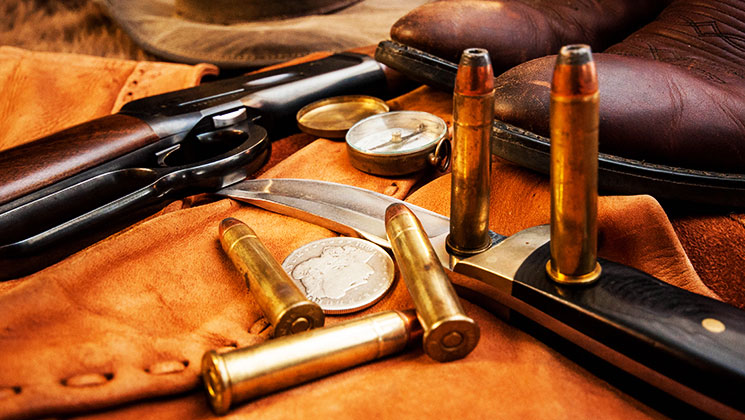 Premium bullets will also further enhance the performance of the .45-70. When Dad and I headed to South Dakota to hunt bison, I handloaded him some 400-grain flat nose Swift A-Frames for that Browning 1886, and his buffalo crumpled like a piece of typing paper when that bullet struck bone.

Hornady offers their FTX spitzer bullet, with the rubbery red tip—perfectly safe for use in a tubular magazine—in their LeveRevolution line of ammo. Using a 325-grain bullet at 2,050 fps, the Hornady stuff can be zeroed at 200 yards, striking three-inches high at 100 yards. Even this ammo, with the best of trajectories, will hit 28 inches low at 300 yards, giving you a good idea of why so many consider the .45-70 to be a relatively short-range rifle in the hunting fields.

The recoil of the .45-70 is not for the faint of heart, especially with the hotter loads. In the lever-action rifles—which usually are on the light side, with a stock design that does not exactly deal well with recoil—you’ll really feel it, and bench work can be a chore. When I developed a handload for Dad’s 1886—decorated with a crescent steel buttplate, with nice pointy ends—I used a thick recoil pad for my shoulder, and it made a big difference. In the field, however, I’ve never had any issues.

Resembling a fire hydrant more than an Apollo-era rocket, the .45-70 Government represents an era of American firearms development that is most certainly romantic and charismatic. However, the usefulness of the design is what has allowed it to see its way from the 19th century through the 21st century. Long live the .45-70!

Looking for previous installments of Behind the Bullet? We've got you covered.

Hardware: Hornady CX | An Official Journal Of The NRA

END_OF_DOCUMENT_TOKEN_TO_BE_REPLACED

The Savage 110 Magpul Hunter gets the Davidson’s Exclusive treatment in the latest offering from Davidson’s.

Prime’s new Inline 5 is aggressive and fast, but it is also easy to shoot and superbly consistent.

Get a closer look at the Franchi Instinct Sideplate, the latest addition to our #SundayGunday series.

#SundayGunday: Franchi Instinct Sideplate | An Official Journal Of The NRA

How to Sharpen a Knife, How to Use a Knife Sharpener, Work Sharp
END_OF_DOCUMENT_TOKEN_TO_BE_REPLACED
Join The Hunt