Quiet rifles are all the rage today, and I’m quite alright with that. Hard-kicking magnums, with their ear-flattening report, muzzle brakes on any sort of rifle, combined with 25 years of being a musician have certainly taken their toll on my hearing; my tinnitus is an aggravating, permanent addition that I wish I didn’t have.

Even though the standard .22 Long Rifle loads don’t produce a terrible report, I appreciate the subsonic rounds, not just for their quiet attributes, but for applications where I don’t want to alarm the neighborhood with the sound of gun fire. Rogue red squirrels that chew holes in the shed, renegade woodchucks and rabbits that destroy the garden I've worked so hard to plant, and the nefarious skunks that prowl the night, just waiting to spray my dogs; all have fallen victim to the subsonic .22 LR cartridge. Let’s take a look at my favorite five.

Aguila Sniper Subsonic
I found these in a gunshop, maybe a decade ago or so, and was immediately intrigued. Using a heavy for caliber 60-grain round nose lead projectile, seated in a shortened case, this ammo makes a great choice for close shooting. Running at 950 fps from a rifle barrel, I’ve experienced that these long bullets will tumble and keyhole out past 50 yards in my Ruger 77/22, but inside that range they are deadly. They will cycle in most autoloaders, and will stabilize in the longer-barreled rifles. Aguila’s SSS ammo will definitely ruin a garden pest’s day. 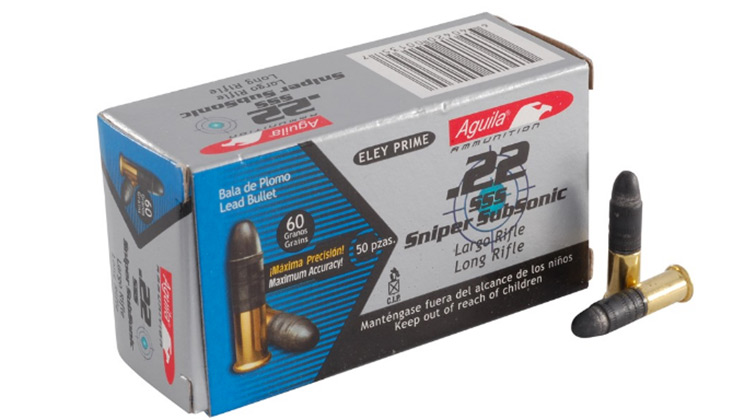 Winchester’s M22 Subsonic
Using a 45-grain round-nose lead bullet at a muzzle velocity of 1,090 fps (my chronograph showed an average of 1,050 fps from my Ruger), the Winchester M22 Subsonic load offers all the accuracy of the M22 line, but in a quiet and efficient package. I didn’t have the opportunity to use these with a suppressor—both suppressors and fun are illegal in New York State, and I believe smiling may be a misdemeanor—but they were plenty quiet. So quiet, in fact, that I got a second shot at the Evil Woodchuck of the Garden that Ol’ Grumpy Pants couldn’t connect on, after he ducked my first shot. I like the blend of a bit heavier bullet than normal, combined with the relatively flat trajectory. M22 and I have become fast friends. 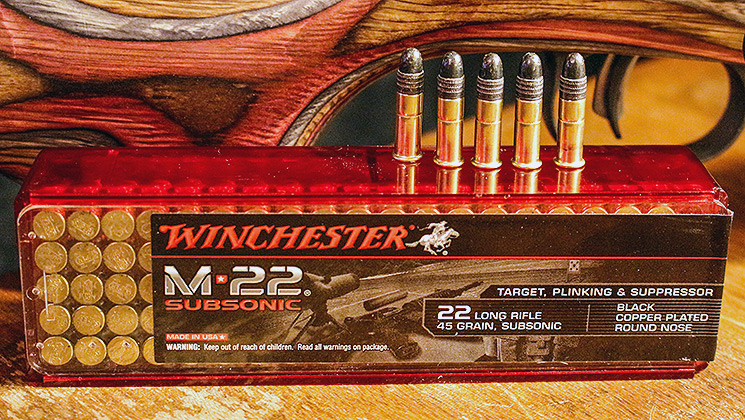 CCI Quiet .22 Segmented HP
This is a horse of a different color, and I like this horse. CCI is using a compressed metal projectile—which, upon impact, breaks into three segments—at the sedate muzzle velocity of 710 fps, for a wonderful close-range load. I first had the opportunity to shoot this ammo in Texas, on a night hunt for skunks and raccoons. It worked so well that I stocked up so I could use it around the house, and have had nothing but success. From my rifle, inside of 35 or so yards, it neatly dispatched the pests such as chipmunks, rogue red squirrels and a chicken-eating raccoon or two. It is plenty accurate from my wife’s Savage Mark II BRJ, yet I felt it really shined in GP’s Ruger Single Six, where it was considerably quieter than other subsonic ammunition, yet was wonderfully accurate when launched from the 4½” barrel. The CCI Quiet .22 doesn’t have the oomph to cycle and autoloader, but you can manually load and eject them, for a great time shooting. 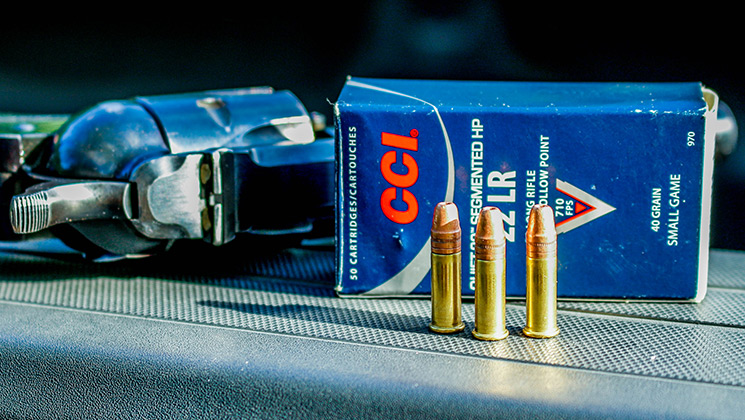 Norma’s TAC-22
I’ve always had a soft-spot for Norma ammunition; dating back to my first experience with their centerfire cartridge cases that I used for reloading nearly two decades ago. I’ve used a whole bunch of their factory loaded stuff, from the medium calibers up through the big safari guns, and it’s been nothing short of excellent. Norma’s TAC-22 is no exception. Used by competition shooters across the globe, the TAC-22 is an accurate, clean burning, positive-cycling product. Using a 40-grain waxed lead bullet—in a round nosed configuration—the TAC-22 leaves the muzzle at 1,066 fps (again this figure may vary, depending on your rifle) for a subsonic load that may possibly represent the most accurate ammunition in its category. Ask a competition shooter; I don’t think you’ll hear a bad word about Norma’s ammo. 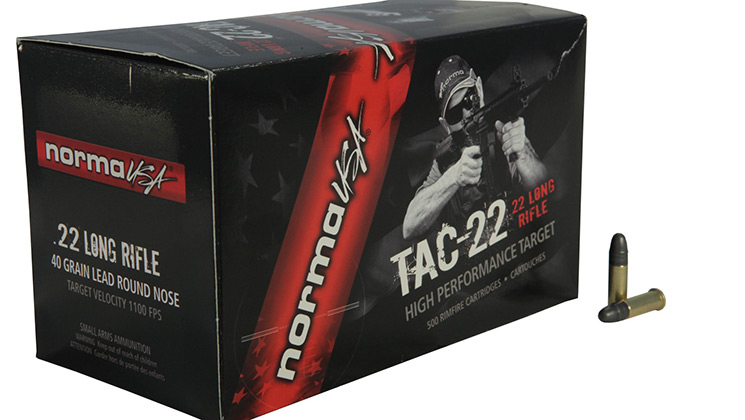 Federal Gold Medal Ultra Match Ammo
I’ve had quite a few good shooting sessions with this ammunition, in many different platforms. From the Ruger 10/22, to my beloved Ruger 77/22, to several vintage target model Winchesters and Remingtons, this ammunition has not let me down. Pushing a match grade 40-grain lead bullet at 1,080 fps, just squeaking under the supersonic line of 1,100 fps or so, this stuff lives up to the Federal Premium name. I’ve used this stuff to put more than a few squirrels in the bag, as well as the occasional cottontail rabbit. Were I to be forced to choose one good subsonic load for my small game hunting, the Federal Gold Medal Match is probably what would get the nod. 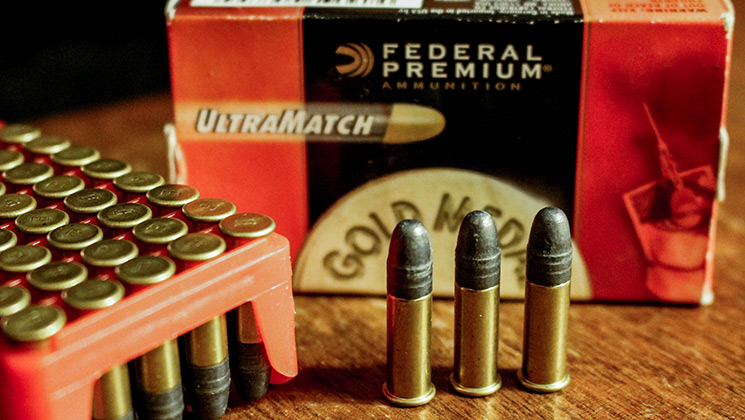 The .22 LR subsonic realm is wide and diverse, and what may work in one or two rifles may not necessarily work in yours. Invariably, you’ll need to do some research, as well as a bunch of field testing. After all, that’s half the fun!

Want to read more from Philip Massaro? Check out the stories below:

Blindsided: A Guide to Blind Building or Buying

Review: Bergara BMR Carbon | An Official Journal Of The NRA

END_OF_DOCUMENT_TOKEN_TO_BE_REPLACED

The Airgun Sporting Association, the trade organization of the airgun industry, announced that West Virginia will soon be allowing air-rifle hunting for both small and big game.

Antler King’s Red Zone food-plot mix is designed to give hunters an opportunity at a trophy buck no matter what season they hunt.

From alpine slopes to desert floors to the whitetail woods, Covert Optics 8X42mms and 10X42mms are made to help hunters dissect the details of wild landscapes to uncover a prospective target animal, or accurately size up a cruising buck in the distance.

Sturm, Ruger & Company, Inc. has announced its reintroduction of the Marlin Model 1895 Trapper.

How to Sharpen a Knife, How to Use a Knife Sharpener, Work Sharp
END_OF_DOCUMENT_TOKEN_TO_BE_REPLACED
Join The Hunt