It was a rainy Virginia youth day, but that didn’t dampen the spirits of sister and brother, Alexandra and Quentin Bailey. They had been anxiously awaiting the 2015 youth day, and a little rain was not about to stop them. They split up with their respective “guides” and were out before first light. A farm along the Cowpasture River in Bath County, Va., was the setting, where four generations of the Bailey family have been privileged to hunt.

Twelve-year-old Alexandra and family friend Poppy headed to a stand on the upper part of the farm where they could watch a field for deer retreating after a night of feeding. After watching the field and an open oak flat for several hours, they decided to move through the oak flat to check a lower section of the farm.

Meanwhile, Quentin and his dad had been between two stands of white oaks, watching for late feeders headed to bed down. They had seen several deer and decided to move on a buck about 500 yards away. As they were stalking that buck, they received a call that Pop and Alexandra were on the move as well. The stalk almost worked, and as Quentin and Dad were deciding what to do next, a single shot was heard.

Arriving at a lower field edge, Alexandra and Pop spotted an impressive rack moving through the tall grass. A 10-pointer was following a doe to a bedding area through an un-mowed field and was almost completely hidden from view in the mist and grass. What an awesome sight! Having passed on several bucks in years past because “they needed to grow more,” Alexandra sized this one up for a bit, made sure the shot was safe and good, steadied her rifle, and with a little “encouragement” from Pop, she connected with a perfect, 150-yard shot from her .243. The buck ran out of sight but was quickly recovered. Calling her dad, she told him she had gotten a “cow-horned spike”—a little story her dad had told his father some 20 years before on a similar-sized buck. The morning was called, pictures taken and a quick trip was made to Gary’s Taxidermy. After lunch it was Quentin’s turn for success.

After seeing his sister score big in the morning, 10-year-old Quentin went back out with Dad that afternoon. Braving the rain, he watched a stand of white oaks not far from the morning’s success. After he sat through an hour and a half of intermittent rain wondering if it would ever stop, several deer came out to feed under the oaks. He watched for a bit and decided that he would take the buck that was in the group. The deer was ranged at 165 yards, and a shot was fired. It was a clean miss! Quentin quickly ran his bolt, loaded another round, regained his composure and connected on the chocolate-horned 3-pointer with his own 150-yard perfect shot from his .243.

It was a great youth day for both brother and sister! 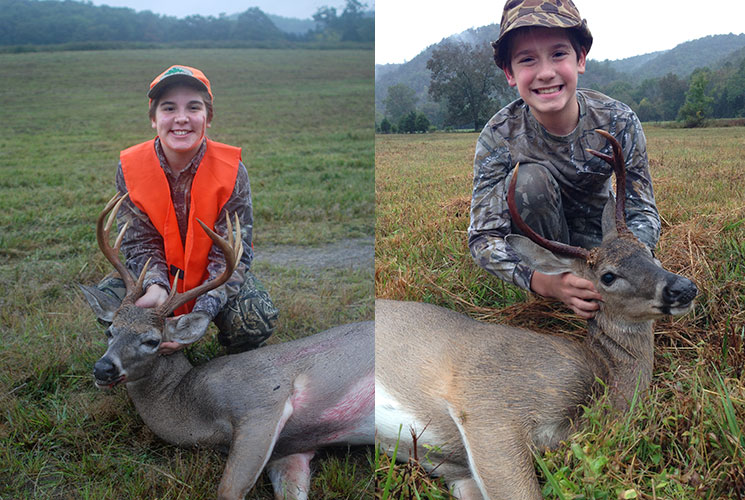 Do you have an exciting, unusual or humorous hunting experience to share?
Send your story (800 words or less) to [email protected] or to American Hunter, Dept. MH, 11250 Waples Mill Road, Fairfax, VA. 22030-9400. Please include your NRA ID number.  Good quality photos are welcome. Make sure you have permission to use the material. Authors will not be paid, and manuscripts and photos will not be returned. All material becomes the property of NRA.

END_OF_DOCUMENT_TOKEN_TO_BE_REPLACED

Contributor Frank Melloni takes the Muddy Odyssey XLT Treestand out for a test-drive, to determine how well the features on the stable ladder stand perform in the field.

Get a closer look at Hornady Precision Hunter, the latest addition to our #SundayGunday series.

The BE.S.T. Lupo is Benelli’s bid to reinvent the hunting rifle, and there’s no doubt the Italian brand is taking that task seriously. An accurate rifle that’s overflowing with forward-thinking rifle technology, the Lupo is going to continue to win fans as more hunters learn to love all that these guns offer.

What it means and how to cope: a dismal but honest look at the current state of western tag allocations, with ideas for alternate hunting adventures.

Rifled Choke Tubes: What You Need to Know

When the use of a shotgun slug is required (or preferred), equipping a smoothbore with a rifled choke tube is always an economical solution. What are the particulars of these specialty chokes? Read on to find out.

Ever wonder how to find big bucks late in the season when they are wise and wary to hunting pressure? Here is part two of contributor Mike Roux's rundown on finding educated bucks.

New For 2022: Smith & Wesson Equalizer | An Official Journal Of The NRA

#SundayGunday: Hornady Precision Hunter | An Official Journal Of The NRA

True Velocity: Re-Defining The ‘Metallic’ Cartridge | An Official Journal Of The NRA

True Velocity: Re-Defining The ‘Metallic’ Cartridge | An Official Journal Of The NRA

Preview: Long Range Arms Send iT MV3 | An Official Journal Of The NRA