If you’re looking for a long-range scattergun load for your next predator hunt, Winchester Varmint X absolutely must be in the conversation. Shot-Lok has done it again.

When Winchester first released its popular Varmint X line of ammunition, the engineers were going for something fast and flat with minimal recoil. What wasn't offered in the original Varmint X line, though, was ammunition for those who prefer to deploy their favorite scattergun against feral hogs, coyotes and other predators. That's changing in 2016, as Winchester has officially announced a new 12-gauge shotshell addition to the Varmint X line.

2016 Ammunition of the Year: Winchester's Shot-Lok

Meet our 2016 Ammunition Product of the Year, Winchester's Shot-Lok technology.

When American Hunter announced its 2016 Golden Bullseye honorees late last year, it did indeed name products in 10 categories that met or exceeded those standards. One of the standouts—and a seasonably relevant one, too—was the 2016 Ammo of the Year: Winchester’s Shot-Lok.

There's no doubt about it, Winchester's Shot-Lok technology has been a full-fledged revolution. Though originally designed with turkeys in mind, the concept has expanded to upland loads and, for 2016, will enter a not-so-feathered market. Coyotes, hogs and varmints the world over will be testing their luck against Varmint X shotshells going forward. 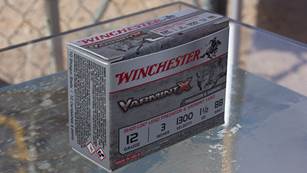 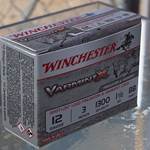 Every varmint hunter, whether he be targeting alfalfa-raiding ground squirrels or fawn-eating coyotes, knows what he wants in ammunition: something fast and flat with minimal recoil. Inexpensive wouldn't hurt, either.

Summer is an excellent time to bust out the varmint loads and put a hurting on small game. With that in mind, Web Managing Editor Shawn Skipper and some of the folks from Winchester ventured to northern Wyoming with the intention of putting the company's .17 Win. Super Mag. to work on the local prairie dog population. Get an inside look at the hunt with this gallery.

How to Sharpen a Knife, How to Use a Knife Sharpener, Work Sharp
END_OF_DOCUMENT_TOKEN_TO_BE_REPLACED
Join The Hunt