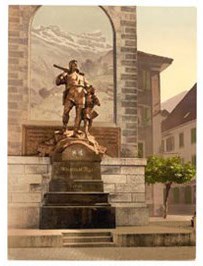 I was in elementary school when I first heard about William Tell, the legendary Swiss archer who shot an apple off his son’s head. I never knew the full story—only that the stakes were awfully high—so I went in search of the details.

According to late 13th and early 14th century Swiss lore, in the canton (district) of Uri there was a Swiss baliff named Gessler, who demanded the people genuflect to his hat on a pole. When Tell refused, Gessler was enraged and demanded that Tell shoot an apple off his son's head with a crossbow for punishment. Quite the marksman, Tell split the apple and was free to go until he announced he had a second arrow that he would have used on Gressler had the first one hit his son. Gessler ordered his crew to place Tell in shackles on their ship as they headed out to sea. Tell escaped and jumped from the ship with crossbow in hand and swam to shore. He assassinated Gressler in 1307 and started a rebellion.

While many historians say the story is fabricated because historical conditions do not support it, there is no way to prove Tell did not exist. The legend remains a part of Swiss culture. Centuries later, Tell is still considered the Swiss National Hero of Liberty and is commemorated through monuments, coinage, theater and music.

Today in Uri, in the center of Switzerland and north of the Alps, stands a bronze statue of Tell holding his crossbow accompanied by his son. It was erected in 1895 and is said to be built at the place where Tell broke free of Gessler's boat and came ashore. Behind the statue is a bronze plate with the following inscription:

This translates to: “It will be talked about (in the sense of stories will be told about) the marksman Tell as long as the mountains stand on their base.”

As for shooting apples with your own bows, old fruits and veggies of any kind sure make for good biodegradable practice targets, providing you have a good backstop for your arrow—and providing the apple isn’t sitting on someone’s head!

END_OF_DOCUMENT_TOKEN_TO_BE_REPLACED

Between the .348 Winchester and .358 Winchester, which cartridge is the better all-around choice for the hunter? Contributor Philip Massaro examines the pros and cons of each.

A Recipe for Reloading the .45-70 Government

Contributor Barb Melloni takes her readers through the process of reloading the .45-70, and her eventually precise result.

Glass Bedding A Rifle Stock | An Official Journal Of The NRA