I was hunting waterfowl in central Manitoba last fall with Narrows West Outfitters, and we had our choice of 12-gauge loads, one of which was Federal Premium’s Black Cloud FS Steel Close Range. I passed on that option Day One because, well, the words “close range.”

We were hunting geese and ducks over decoys spread over harvested rye fields and were shooting from layout blinds, with some of our shot being out to 40 yards—that’s “close range,” right? But I quickly noticed that one of my hunting companions was dropping ducks and geese at that range—using the Black Cloud FS Steel Close Range shells. I switched loads, and soon realized that “close range” in the shell’s name is misleading. Here are five things you need to know.

1. It achieves a full pattern within 20 to 30 yards.
Sure, Black Cloud FS Steel Close Range does a fine job at 30 yards and in. Technically speaking, it was made for closer-range shooting over decoys, and in flooded timber when the greenheads suddenly parachute down right in front of you. Using a 100 percent FliteStopper payload, the shells achieve a full pattern within a very short distance. (Other Federal loads, like the standard Black Cloud, use a mix of FliteStopper and traditionally-shaped pellets.) Available only in 3-inch shells, the 12-gauge options are loaded with either #2 or #3 shot, the 20-gauge with #2 or #4 shot.

3. Its pattern holds together well at further distances.
Using the Black Cloud FS Steel Close Range with #3 shot, I dropped at least four Canada geese—all around 40 yards—with a single shot, as well as a mallard hen flying from right to left, just beyond the dekes. I stepped off 45 yards retrieving her. A hunting companion told me he and friends were dropping crows with the same load at 50-plus yards just weeks before our Manitoba hunt. I wouldn’t take that far of a shot on a tough Canada goose, but was impressed to hear the pattern held together that far out.

4. It works and recoil is manageable.
I used a Stoeger M3500 inertia-drive 12-gauge during my hunt. Stoeger’s workhorse semi-auto features a 28-inch barrel and a Realtree Max5 camo finish; I had it fitted with an Improved Cylinder choke tube. I ran through at least 100 shells of Black Cloud FS Steel Close Range and never had a failure to feed or extract. Recoil? It’s a 12-gauge, of course, but the kick was nowhere near objectionable. 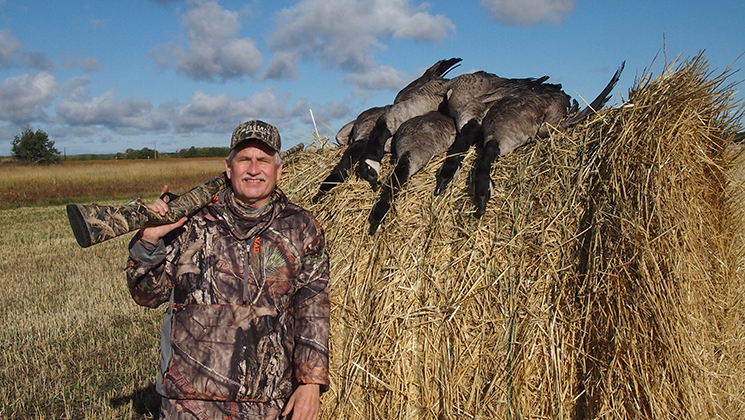 6.8 Western: A Candid Look at the New Cartridge

Loading Bench: The Berger Juggernaut At 1,000 Yards | An Official Journal Of The NRA

2022 Ammunition Product Of The Year: Hornady Subsonic | An Official Journal Of The NRA

END_OF_DOCUMENT_TOKEN_TO_BE_REPLACED

Contributor Mike Roux gives readers some tips on keeping their skills and equipment up to snuff throughout the summer season.

Knoxville-based Tisas, a premium supplier of 1911-style pistols, has entered the realm of magnum performance with the launch of the new D10 10mm.

Designed to combine the ultimate in speed and stealth, the Carbon Express Maxima Sable RZ is constructed with Carbon Express’s exclusive TriSpine technology.

FORLOH is an all-American gear company formed in 2020 with the express intent of delivering high-quality technology to the outdoor world. It stands at the cutting edge of clothing technology—and it does so with all-American-made products.

Get a closer look at GForce Arms LVR410, the latest addition to our #SundayGunday series.

#SundayGunday: GForce Arms LVR410 | An Official Journal Of The NRA

2022 Ammunition Product Of The Year: Hornady Subsonic | An Official Journal Of The NRA

Loading Bench: The Berger Juggernaut At 1,000 Yards | An Official Journal Of The NRA