When I think about serious stopping rifles and cartridges—the kind that will put a dangerous game animal down and put it down fast—the bore diameter usually starts with ‘five.’ The .500 Nitro Express is the darling of the double rifle fans, but among those who prefer a bolt-action repeating rifle, the .500 Jeffery and the .505 Gibbs are among the most popular choices, and with good reason. While there are larger choices for bolt guns—the .577 Tyrannosaur and .600 Overkill come quickly to mind—the .500s represent what may be just about the top end of tolerable recoil for mortal humans, especially in a rifle which doesn’t require a caisson. 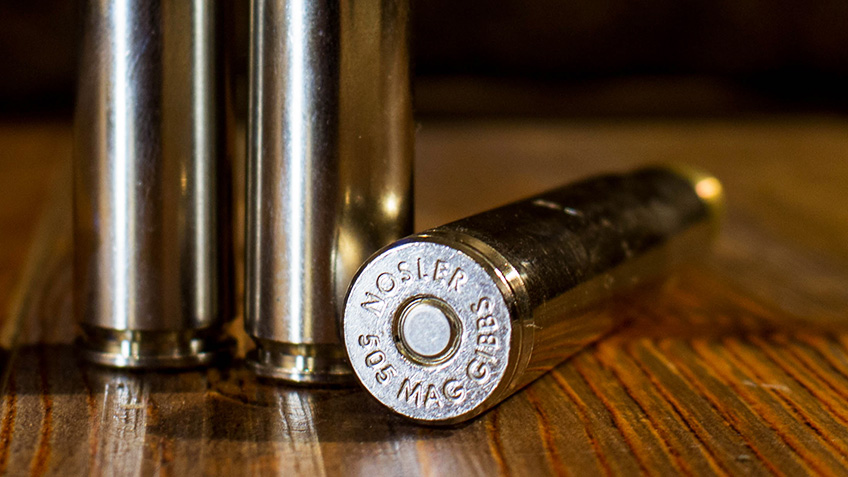 Both cartridges are nearly as rough on the shooter as they are on the game animal, and it requires diligent practice and dedication to shoot these big cartridges accurately. Both will certainly stop a charge better than any lesser cartridge, and both have been known to split rifle stocks. Both are popular choices among Africa’s professional hunters who routinely deal with elephant, Cape buffalo and hippo, as well as those clients who hire them. There is something special about a rifle with a bore so large you can stick your finger in it, using a case the size of a MiniMag flashlight: it means business. If the brute force of the butt-end of the rifle doesn’t bother you, and you feel that your hunting will warrant owning a rifle in this class, the differences between these two can be important. Let’s compare and contrast the Gibbs and the Jeffery. 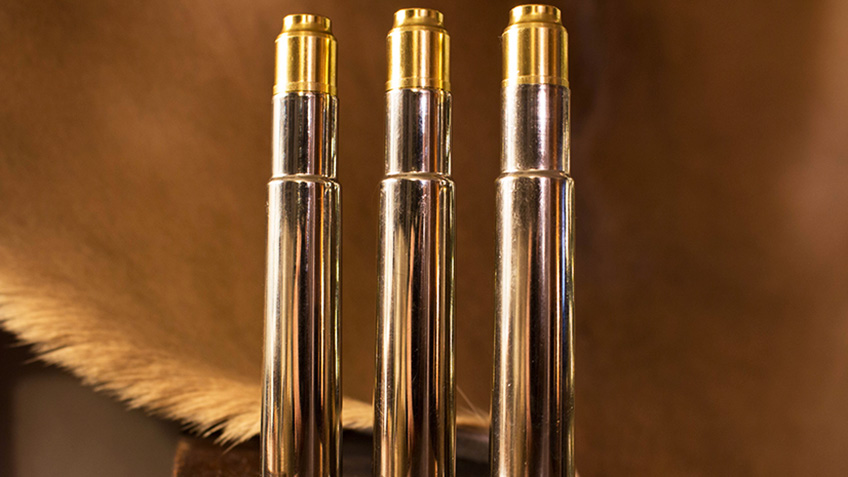 The voluminous .505 Gibbs was introduced in 1910 by George Gibbs, using a 525-grain of nominal diameter, at an advertised muzzle velocity of 2300 fps for over 6,100 ft.-lbs. of energy. With a case capacity of 178 grains of water, the .505 Gibbs runs at a lower pressure than does many other cartridges of this class, with CIP recommending a maximum pressure of 39,000 psi. With this kind of bullet weight and energy, the .505 Gibbs earned a reputation as an excellent choice for all of the dangerous big-game species in both India and Africa. Using a case length of 3.150 inches and a cartridge overall length of 3.850 inches (the same as the .375 H&H Magnum) the .505 Gibbs works well in a magnum Mauser receiver. It is a rimless design, with a shoulder angle of 35-degrees 35-minutes, which allows for good headspacing. If you’re a fan of African literature, you may recall that the .505 Gibbs was the cartridge of choice of Robert Wilson, in Hemingway’s The Short Happy Life of Francis Macomber; “I’ve this damned cannon…” is a quote that stuck with me since I first laid eyes on it. 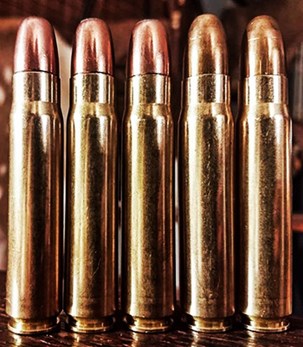 The .500 Jeffery came to light around 1920, by all accounts, but came from Germany, where it was known as the 12.7x70mm Schuler, or the .500 Schuler. W.J. Jeffery picked up the cartridge, but because the Great War had ended just over a year prior and the Germans weren’t exactly revered in Great Britain, they added the Jeffery name to it. Using a 2.75-inch case with a rebated rim (.575-inch diameter), the .500 Jeffery was designed to fit easily in a standard 98 Mauser action. The .500 Jeffery originally used a .510-inch diameter 535-grain bullet at 2400 fps for 6,800 ft.-lbs. of energy, and at the time of its release it was the most powerful hunting cartridge available (the .460 Weatherby Magnum supplanted it). Holding 158 grains of water, the .500 Jeffery certainly has the capacity for a considerable amount of powder, though it does run at a higher pressure than the Gibbs does. C. Fletcher Jamison had one of the few Jeffery’s rifles chambered for this big cartridge—the rifle is now in the wonderful collection of Bill Jones—and took elephants numbering into the hundreds with it before his untimely death, and many African professional hunters rely on the .500 Jeffery as a backup rifle.

Having loaded for and shot several rifles chambered for these two brutes, I can tell you that the recoil of both is a serious factor, and neither of these cartridges are a wise choice for the recoil sensitive. But if you can ride the lightning, you have a serious piece of gear in your hands. Which is the better choice? It’s a tough call. Factory ammunition is available for both from Norma and Nosler, and there is good component brass and bullets for both as well (the .500 Jeffery shares the same bullet diameter as the .500 Nitro Express). I find the Jeffery case delivers a sharper, faster recoil than the Gibbs (attributed to a higher pressure), though the Gibbs will definitely grab your attention. 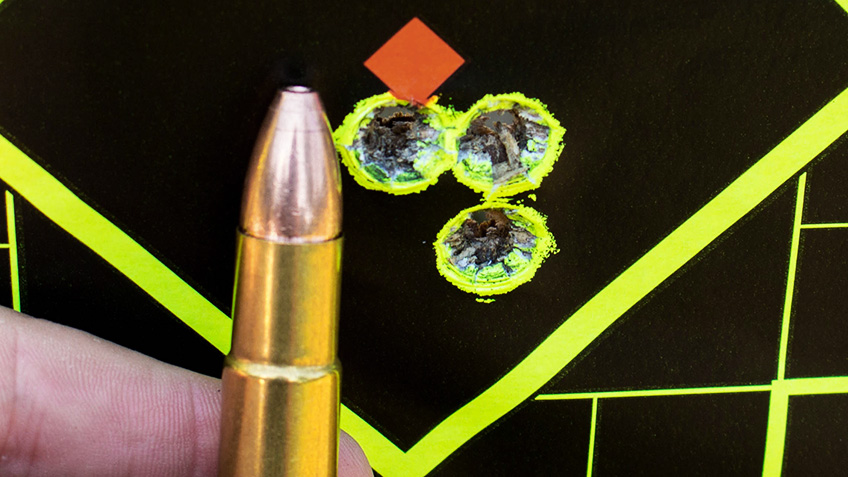 When both the cartridges are housed in a properly tuned rifle, there is no issue with feeding or extraction, but I've seen more than one instance where the rebated rim of the .500 Jeffery—with a less-than-perfect magazine follower—will have issues feeding the last round in the magazine. It’s usually attributed to the angle of the cartridge to the bolt face; if the cartridge has the slightest nose-up attitude, the bolt face will ride over the top of the rebated rim, and it’ll make a mess of things. With a dangerous game rifle—relied on to stop a charge—this can be a dangerous proposition. Should you buy a .500 Jeffery rifle and see this, get it to a competent gunsmith immediately.

Both cartridges can use bullets up to 600 grains, though the 525, 535 and 570 slugs certainly do their job. And with modern bullet designs—both expanding softpoint and solids—these cartridges perform better than they ever have. Forced to make a choice between the two, I’d probably have to favor the .505 Gibbs, for its reliability of feeding and lower pressure. My buddy Mike McNulty is a huge fan of the Gibbs, and he owns the first Heym Express by Martini chambered for the cartridge. It feeds like a dream, shoots just as well and we used Alliant’s Reloder 15 and a Kynoch foam wad to attain the proper velocity with 525-grain bullets, while reducing the felt recoil considerably. In spite of 115-degree heat, there were no feeding, extraction or pressure issues over the course of his safari. I like the longer neck and fatter rim of the Gibbs, even though it requires a longer receiver. 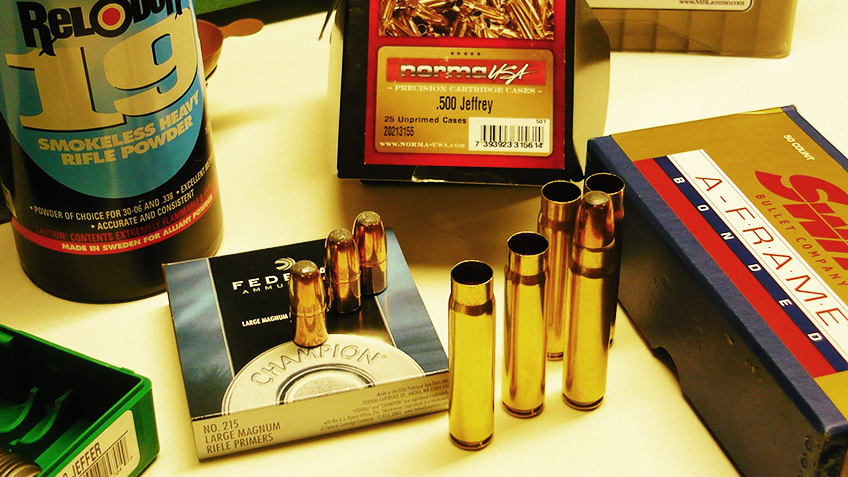 These are both African classic cartridges, and if you’re a fan of .500 Jeffery, I can’t find fault with you, I just find the Gibbs design a bit easier to work with in the grand scheme of things.

Rifleman Q&A: U.S. Model Of 1928 Thompson Variants | An Official Journal Of The NRA

New for 2023: Fiocchi Speed sTEAL | An Official Journal Of The NRA

END_OF_DOCUMENT_TOKEN_TO_BE_REPLACED

A Recipe for Reloading .45-70 Government

Contributor Barb Melloni takes her readers through the process of reloading for .45-70, and her eventually precise result.

Preview: Nebo Slim+ 1200 | An Official Journal Of The NRA

Glass Bedding A Rifle Stock | An Official Journal Of The NRA