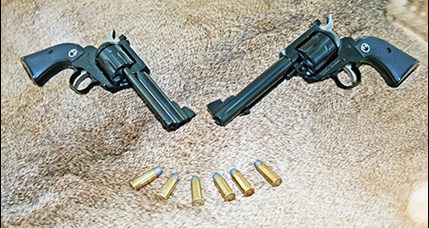 I mostly lurk in several shooting forums on the Internet; occasionally I’ll chime in on something if I feel I have something to say that hasn’t been said. One particular forum has some fellas waxing about the .44 Spl. One gentleman said that it wasn’t until quite recently that he realized the .44 Spl isn’t all about some bloviating gun writers’ line of bovine residue. He had bought a Ruger Flat Top in that caliber and found it to be accurate, hard-hitting and manageable.

My first centerfire handgun was a Smith & Wesson Model 27 in .357 Mag. The versatility of the cartridge, along with its capability of handling less-expensive .38 Special ammo is what lured me to this revolver. As my interest in handguns blossomed, I, too, was smitten by the prose of several gun writers of the day as they touted the virtues of the .44 Spl. In all my scrounging around during those years I found exactly one Smith & Wesson 1950 Target .44 Spl. It had a 6½-inch barrel on it as well as a $750 price tag. This was in about 1976, and it was far too rich for my plebian blood.

About two years later I bought a Model 28 Highway Patrolman. I also bought an original 1950 Target barrel from Bob Sconce at the old MMC company and found a local gunsmith who would marry the two. I had him trim the 6½-inch barrel to an even 5 inches and reset the front sight, and he converted it to a ramp style. I finally had my .44 Spl. It didn’t take long to find out that these old gun writers knew what they were talking about when it came to the .44 Spl.

I used to have—and may still within all of my junk—an early target I shot with this revolver. Five of six 245-grain semi-wadcutters went through a single hole; the sixth shot almost touched the hole. I shot that target at 25 yards, offhand and single action. Of course, I’ve never repeated that shooting, but it certainly speaks to the inherent accuracy of that cartridge and revolver.

A lot of water has passed under the bridge since then, and I have been fortunate to expand my .44 Spl collection considerably. Nowadays I am rarely more than arms’ length from one of my prized .44s. More often than not it is a .44 Spl that I have on me when I head to town. Not always, mind you, but most of the time. Thankfully, I have yet to have had to shoot another human, but I have taken several wild hogs and a couple of deer with my .44s. The cartridge has never failed me.

Now I dearly love all my guns—they’re much like my children to me—so I can never say which one is the one I’d always keep and give up the rest. My .22s—both revolvers and semi-autos—remain sacrosanct for the varminting and small game hunting that gives me so much pleasure. The .357s are like the .30-06; it would be un-American to not have them around. And anyone who has read this diatribe for very long knows of my passion for the 1911 and its .45 ACP cartridge. The .44-40 WCF, .44 Mag. and .45 Colt will always have a special warm place in my heart. But I will never be without my .44 Specials.

In this article
.44 Magnum, 44 special, dave campbell, Lessons from the Ridgetop, varmint hunting

Hunting Ammo: What to Look for in a Big-Game Bullet

Varmint Hunting for … Training? | An Official Journal Of The NRA

2022 Handgun of the Year: Colt Anaconda | An Official Journal Of The NRA

A First-Year Magnum: Shooting The S&W “Pre-29” | An Official Journal Of The NRA

Hardware: Colt Anaconda | An Official Journal Of The NRA

END_OF_DOCUMENT_TOKEN_TO_BE_REPLACED

Get a closer look at the Winchester SX4 Left Hand Waterfowl Hunter, the latest addition to our #SundayGunday series.

A recent trip to Hawaii inspired contributor Brad Fenson to create a chimichurri sauce variation, where cilantro, cumin and lime juice produce a new twist on the traditional blend.

DIY Skull Cleaning on the Road

Awareness of chronic wasting disease has spread across the country and today includes regulations regarding the transport of ungulate skulls taken by traveling hunters. Follow these suggestions to clean your skulls while on the road to avoid running afoul of any game laws.

Contributor Frank Melloni tests out two trail cameras from Browning, with both scouting and property security in mind.

The new 110 PCS bolt-action pistol is built around the 110’s factory blueprinted action, which is secured in a one-piece aluminum chassis from MDT and includes an AICS-style detachable box magazine. It makes for the perfect all-terrain firearm, and would be particularly useful when hunting from a tight ground blind.