Anytime a new cartridge is introduced many ask if it’s really needed. We have hundreds already, so the question is valid. What many overlook are the subtle and even substantial, advantages a new cartridge might offer. The new .300 HAM’R from Wilson Combat is a perfect example. It turns the AR-15 into a rifle capable of bettering the performance of the iconic .30-30 Winchester. 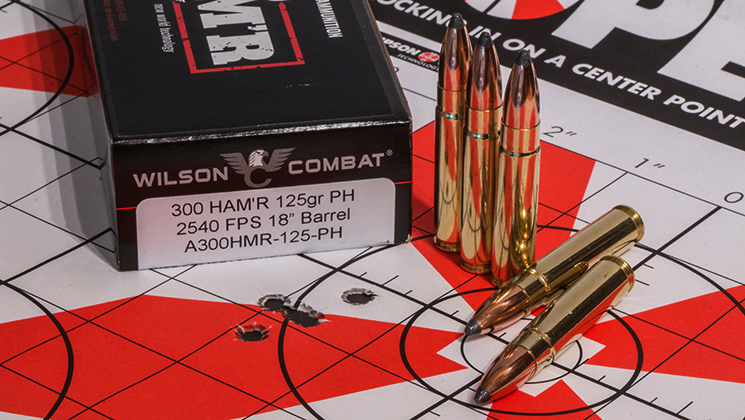 Bill Wilson of Wilson Combat is a die-hard hog hunter; he kills hundreds every year on his Texas ranch. Bill has tried every AR-15-compatible cartridge looking for the one that offers the ideal balance of simplicity of conversion and terminal and external ballistics. He finally decided that to get what he wanted, he would have to design his own. Starting with another proprietary cartridge he developed—the 7.62x40 WT—Wilson slightly increased case capacity while maintaining compatibility with standard AR-15 magazines. When he paired his new creation with Hodgdon’s CFE BLK powder, he hit a home run.

Operating at AR-15 platform-safe pressures between 50,000 and 58,000 psi, this little cartridge performs exceptionally well from carbine-length barrels. Now keep in mind, this is not a subsonic cartridge; it’s a supersonic cartridge you can convert your AR-15 in .223 Remington to, with only a barrel change. With a 1:15″ twist, it’s exceptionally accurate, and is death to swine with a wide variety of .308 caliber bullets. 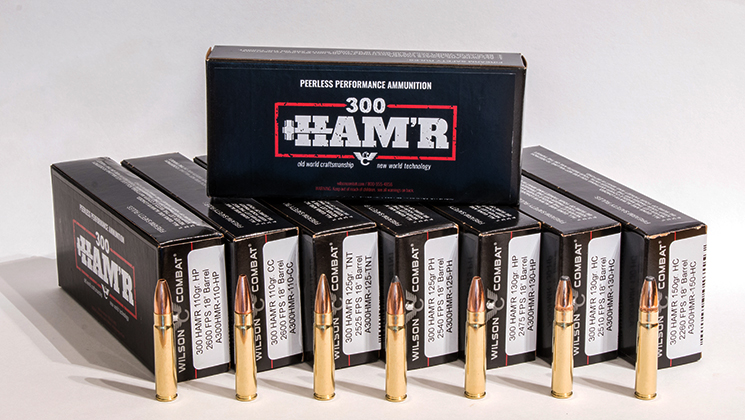 Out of a compact .30-30 lever-action with a 16-inch barrel, you can expect to push a 150-grain bullet to about 2250 fps. Because of the low ballistic coefficient (BC) of the blunt-nosed bullets, necessitated by the tubular magazine, they’ll deliver in the neighborhood of 1,250 ft.-lbs. of energy at 100 yards. Because the .300 HAM’R feeds from detachable magazines, it can use pointy bullets with higher BCs. At 100 yards, the .300 HAM’R will hit 20 percent harder than the .30-30 Winchester—and because of these more aerodynamic bullets, trajectory is flatter. 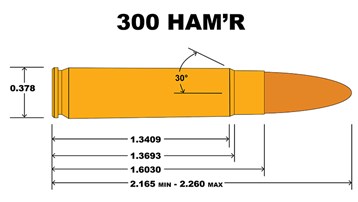 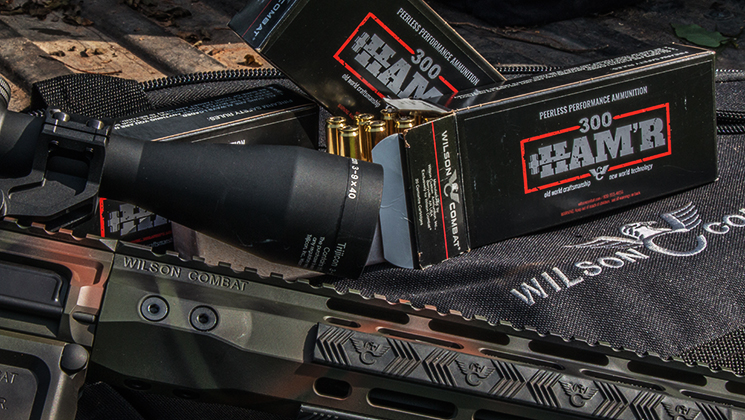 I’ve been testing this cartridge in a Wilson Combat Tactical Hunter, and I can’t decide if I’m more impressed with the new cartridge or the rifle. Every .300 HAM’R load from Wilson Combat (they offer seven) produced five-shot, 100-yard groups, right around the inch mark. Surprisingly, I noticed all the loads seemed to shoot to near the same point of impact. So, I loaded ten rounds in a magazine—two cartridges from five different loads—and fired a 10-shot group that measured only 1.56 inches. That’s astounding, especially considering bullet weights ranged from 110 to 150 grains. Try doing that with any other rifle you own.

There are two main takeaways. The first is that the Wilson Combat Tactical Hunter—which weighs only 6 pounds—might be the slickest operating, best shooting AR-15 I’ve ever fired. The second is that the new .300 HAM’R cartridge is unquestionably the best big-game cartridge you can fit inside an AR-15 without going to a larger bolt, like is used with the 6.5 Grendel or the .30 Remington AR. The .30-30 has been successfully used for everything from coyotes to moose for more than 100 years. In the late 1920s, ivory hunter Wally Johnson even used his .30-30 for lion. 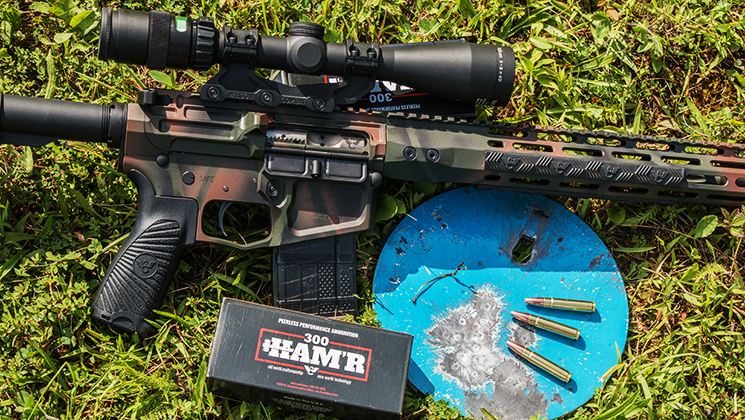 The .300 HAM’R will do everything the .30-30 Winchester will do and more, but from an AR-15 platform; and in the Wilson Combat Tactical Hunter, it weighs less, shoots better and holds a lot more ammunition than any .30-30 lever-action rifle ever made.

Shot Placement 101: Where to Shoot a Deer

Handloads: Hunting With The .375 Winchester | An Official Journal Of The NRA

Handloading The .223 Rem. | An Official Journal Of The NRA

Behind the Bullet: .450 Bushmaster | An Official Journal Of The NRA

END_OF_DOCUMENT_TOKEN_TO_BE_REPLACED

Get a closer look at Hornady Precision Hunter, the latest addition to our #SundayGunday series.

What it means and how to cope: a dismal but honest look at the current state of western tag allocations, with ideas for alternate hunting adventures.

Rifled Choke Tubes: What You Need to Know

When the use of a shotgun slug is required (or preferred), equipping a smoothbore with a rifled choke tube is always an economical solution. What are the particulars of these specialty chokes? Read on to find out.

Ever wonder how to find big bucks late in the season when they are wise and wary to hunting pressure? Here is part two of contributor Mike Roux's rundown on finding educated bucks.

Get a closer look at the Winchester Model 70 Extreme TrueTimber VSX MB, the latest addition to our #SundayGunday series.

Ever wonder how to find big bucks late in the season when they are wise and wary to hunting pressure? Contributor Mike Roux gives the rundown on some tips that have worked for him throughout the years.

New For 2022: Smith & Wesson Equalizer | An Official Journal Of The NRA

Finding Educated Bucks: Part 2 | An Official Journal Of The NRA

Handloads: Hunting With The .375 Winchester | An Official Journal Of The NRA

Preview: Long Range Arms Send iT MV3 | An Official Journal Of The NRA