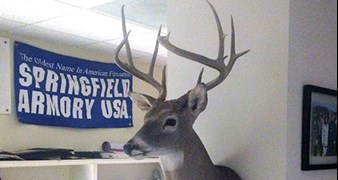 Folks are doing a lot of neat things with taxidermy nowadays. Trophies are available in just about any style or position imaginable, and countless companies offer kits to help you turn your next wall mount into a full-fledged DIY project. What you don't see much of, though, is people calling upon taxidermy in a fight. Until last week, that is.

According to a report from the New York Daily News, two women in Pennsylvania tried to settle a personal conflict with taxidermied deer heads on July 26. Stacy Varner, 47, and Glenda Snyder, 64, were at a home in Cromwell Township, Pa., when trouble started. According to the police report, the duo began arguing (over what, I can only imagine) and, in short order, the confrontation grew physical. Rather than duke it out with their fists, participants instead reached for the nearest wall mount. Sadly, the report doesn't mention who "drew" first—I'd love to know which of our combatants was the first to think that a whitetail mount would come in handy in a fight.

Fortunately, the farcical duel didn't gain much steam. According to The Patriot-News, Snyder was hit by an antler and suffered a minor injury, but neither party managed to cause substantial damage. Both parties are being charged with simple assault. I'd imagine that the pair will reach a truce and agree to drop said charges against each other when the time comes.

How often do you think the police have to register whitetail mounts as evidence?

END_OF_DOCUMENT_TOKEN_TO_BE_REPLACED

American Hunter Editor in Chief Scott Olmsted was on hand in December at Gunsite Academy in Paulden, Ariz., when Colt introduced its four-inch-barreled Anaconda.

Beretta has announced the launch of a new turkey-hunting shotgun—the A300 Ultima Turkey.

Winchester, the largest manufacturer of small caliber ammunition for the U.S. military, has announced that the U.S. Army has awarded the company a contract to manufacture, test, and deliver 5 million 6.8mm Next Generation Squad Weapon (NGSW) cartridges.

How to Build a Home Butcher Shop

Any space including a garage, shop or storage shed can be turned into a game-processing center. Learn about hoists, knives, vacuum sealers, grinders and dehydrators you need to build your own butcher shop.

Between the .348 Winchester and .358 Winchester, which cartridge is the better all-around choice for the hunter? Contributor Philip Massaro examines the pros and cons of each.

#SundayGunday: Colt Anaconda 4" | An Official Journal Of The NRA