Here is a sentence designed to lose friends and anger people: “The .308 Winchester is a dog.”

Ouch. That’s a bit like saying the U.S. Marines are wimps and sissies (They aren’t!). But the .308 Winchester, also known as 7.62x51mm NATO, is still a poor choice as a long-range hunting cartridge, sniping cartridge and maybe even target cartridge.

Now wait a minute! How can that be when virtually every long-range, precision and sniper-style rifle introduced is chambered for the .308 Winchester?

Tradition. Yeah, the .308 Win. survives on tradition. Because it was widely distributed by our military, chambered in the M-14 and the M-40 (modified M700 Remington) sniper rifle during the Vietnam war, it became widely known and used. But that doesn’t make it the best. It wasn’t as if our soldiers had a choice between the .308 Win. and 7mm-08 Rem., 260 Rem., 6.5 Creedmoor, 243 Win. or even the old 6.5x55 Swede. They shot what they were provided and learned to make the best of it.

You and I don’t have to.

Here are some positive .308 Win. attributes:

1. Runs through short actions, so rifles can be compact.
2. Mild recoil, so can be shot precisely without flinching.
3. Not over-bore, so barrels last.
4. Wide selection of bullet weights, styles.
5. Inherently accurate? So it’s claimed, but I don’t buy it. Accuracy depends on barrel, bullet, trigger, crown and overall concentricity more than the shape of the brass powder reservoir. If the .308 is so accurate, why is the 1,000-yard bench rest world record held by a 6mm Dasher? Why is the winningest cartridge in bench rest history the 6mm PPX?

Here are some negative .308 Win. attributes:

1. Too little powder capacity for its bore size.

That’s it. That’s the whole problem. Because of its limited powder capacity, the .308 Win. case can’t drive high B.C. bullets fast enough to produce the most effective long range performance. Compared to smaller calibers built on short-action cases (often the .308 case necked down,) it suffers from excessive bullet drop, drift and lost energy. You can play with ballistic calculators for hours to check this out, but the following example should give you enough information to spotlight the 308’s shortcomings. In these computer generated comparisons, each cartridge/load is at maximum power, each bullet is the highest G-1 B.C. I could find listed in its weight, each rifle is zeroed at 200 yards and each fired under identical conditions with 10 mph right angle wind. 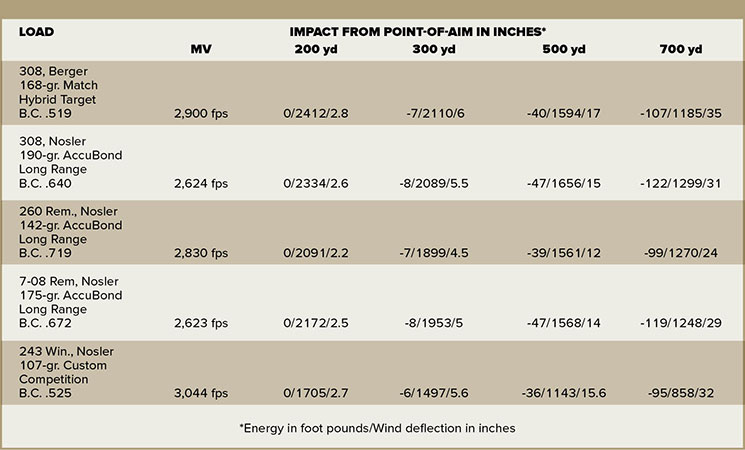 Notice that each cartridge is a version of the .308 Win. and most shoot flatter and drift less. Notice also how some lighter bullets have less kinetic energy than the .308 loads at 200 yards but carry more at 700 yards. The best overall balance of flat trajectory, retained energy and minimal wind deflection goes to the little known, under appreciated 260 Remington. It even out-muscles the 168-gr. 308 bullet after 600 yards.

Notice also how performance is similar for every cartridge/bullet combination to 300 yards. The .308 Winchester more than holds its own in drift and drop. It wins in retained energy. For general purpose hunting and short range shooting, the .308 Win. shines. But beyond 300 yards… let’s not pretend it’s some kind of long-range marvel, because it’s not.

END_OF_DOCUMENT_TOKEN_TO_BE_REPLACED

With turkey season around the corner, Mojo has added the Scoot-N-Shoot Gunner to their turkey lineup.

Browning's new Pro22 is the company's latest addition to its ammo lineup, providing target shooters and plinkers with a new high-accuracy option for shooting their favorite rimfire rifle.

The all-new Nosler Suppressors are designed specifically for hunters to strike an ideal balance between size, light weight, exceptional durability and sound mitigation.

#SundayGunday: Rossi Gallery | An Official Journal Of The NRA