Earlier this year, Oregon-based Leupold Optics launched the LTO-Tracker, a handheld thermal imaging device that was crafted with hunters in mind—which still didn't stop our friends over at Shooting Illustrated from taking a closer look at it as a personal defense tool. This spring, Leupold doubled down on the concept by introducing the LTO-Quest. The palm-sized LTO-Quest differentiates itself from the original Tracker (which more resembles a monocular) by serving as a palm-sized thermal imaging viewer and camera. Here are four things you need to know.

It does its job.
The LTO-Quest packs quite the punch for its size. Using its 206x156 thermal sensor with a 20 degree field of view, it's capable of detecting a thermal reading out 300 yards using any one of eight color palettes. It’ll operate in temperatures ranging from four-below to 140°F, and it can read temperatures well beyond that—on both sides of the spectrum. 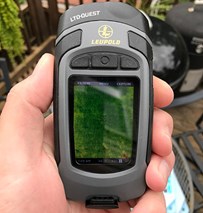 It's compact.
Truth be told, neither of Leupold's thermal products is really a burden to carry around. The Quest really is palm-sized—see the embedded photo for proof of that. Better yet, it weighs in at just less than 7 ounces, so you're not going to have to worry about it adding much weight to your pack.

Features, Features, Features
The LTO-Quest is packed with a bevy of little features that hunters will be able to appreciate. It has a rugged, rubberized body that should keep it relatively safe from whatever elements you’re dealing with. It includes a 300 lumen, dual intensity flashlight, and a micro USB is port is included both for charging, and to download any images that are stored on the included, removable microSD card.

It's easy to use.
"Thermal imaging device" may sound intimidating on paper, but never fear—the LTO-Quest is decidedly easy to use. The controls are intuitive, and take no time to master. A four-hour battery life ensures that your Quest will make it through any job you've got in mind.

END_OF_DOCUMENT_TOKEN_TO_BE_REPLACED

The winning artist in each contest receives a $2,000 award and winning artwork is used to produce collector's stamps and other promotional items with sale proceeds benefitting Oregon's fish, wildlife and their habitats.

The latest X-Bolt’s new Ovix camo pattern is suitable for a variety of environments, and its shortened, threaded barrel allows users to mount a suppressor while maintaining a reasonable overall length.

The National Shooting Sports Foundation (NSSF), the firearm industry trade association, revealed that at least 5.4 million people purchased a firearm for the first time in 2021.