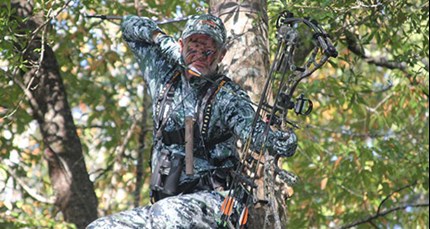 I knelt on the tundra, doing my best imitation of a blueberry bush, hoping the advancing caribou bulls would buy it. If they came another 75 yards, they would cross 40 yards in front of me. A slam dunk bow shot.

The problem was the crosswind whipping right to left at about 25 miles an hour. When I raised my bow to draw and shoot, the wind pushed stiffly against my bow quiver, which was filled with five hunting shafts. To minimize the problem I had positioned myself in a shallow depression and knelt as low as I could and still shoot. When the time came I made the shot, one that under normal circumstances would have been pretty routine but was instead quite a challenge.

Bow vs. Non-Bow-Attached Quivers
For many years a debate has raged among bowhunters concerning whether or not using a quiver attached to your hunting bow affects shooting accuracy. This debate was fueled a decade or so ago when a prominent bowhunting celebrity began marketing his own hip quiver, telling his readers that unless they took their quivers off their bows they would never be top-notch field shots.

To sum up what I’ve found since that time, using a bow-attached quiver will certainly affect your shooting. However, under most hunting situations the degree that it does so is so insignificant as to be inconsequential.

My good friend Jim Velasquez has been in the archery business for decades. For many years he has owned Sagittarius, a quiver manufacturer that marketed quivers directly to consumers as well as private labeled quivers to several major bow makers. He’s also owned an archery pro shop, and currently works for another in the San Diego, California area.

Here’s his take on the topic:
"I don't believe that most people can see the difference, once they start shooting the bow with a quiver full of arrows,” Velasquez said. “You definitely have to tune the bow and sight it in with the quiver attached, then you'll be used to it and it will not significantly affect accuracy.

“A bow quiver can be heavy when full of hunting arrows, making it harder to steadily hold the bow up when aiming and shooting,” Velasquez said. “However, this is minimal. We have found that a lot of guys have gone to using quivers that hold 4 or 5 arrows rather than the 8-arrow quivers that were popular a decade ago, even out West, because this lightens the bow up and also reduces mass and vibration.”

To back up his contentions, Velasquez did some serious testing using a shooting machine. This machine shoots the bow, eliminating any human discrepancies so that each and every arrow is released exactly the same.

Here’s what he found:
“We used the shooting machine so we could see exactly what the differences would be with and without an attached bow quiver and without human error on the shooting,” Velasquez said. “We shot out to 40 yards, and shot in excess of 400 arrows, using 4, 6, and 8 arrows in the quiver. The bows were all properly tuned both with and without the quiver attached. We never saw any difference in point of impact between the two. When we went down from 8 arrows to one arrow in the quiver, we saw a very insignificant point of impact change, but not enough to make any difference in a person's ability to hit a kill zone in hunting situations out to 40 yards.”

Quiver Design Improvements
Bow quiver design has improved greatly over the years. A shooter can still choose between a two- piece and one-piece quiver. Most one-piece quivers are attached at only one point on the bow, creating a sort of “tuning fork” thing that creates vibration that causes noise. With a two-piece quiver–the most popular type sold today—you have two solid connecting points, with no bar to create vibrations. This style also tends to sit closer to centerline of the bow, making them inherently quieter.

“This is critical with a bow quiver,” Velasquez said. “The closer to the bow’s center line the quiver sits, the less torque you have.”

Non Bow-Attached Quivers
Both hip quivers and some back quivers are popular with some bowhunters. These shooters feel they shoot a more consistently-accurate arrow if they don’t have a quiver attached. In treestand hunting, detachable quivers—like those made by Kwikee Kwiver, though there are others—are popular. Here a bracket is attached to the bow, and the quiver snugged into the bracket. The hunter is then able to conveniently transport his arrows to his stand site, where he then removes the arrow-filled quiver and hangs it in the tree within easy reach should a follow-up shot be needed.

Some spot & stalk hunters prefer the hip quiver, but for me the disadvantages outweigh any small accuracy gain that may result. These disadvantages include the fact that you can't comfortably sit on the ground with the quiver on your belt, the arrows tend to smack noisily into brush and limbs, and it is very hard to crawl and duck under objects. For me, a bow quiver is the most simple and efficient method of field arrow transport.

5 Tips to Prepare for Your First Bowhunt | NRA Family

END_OF_DOCUMENT_TOKEN_TO_BE_REPLACED

Veil Camo has announced the integration of its Wideland Camo pattern with the new Buck Bourbon Rack House 300+ One Way Mesh hunting blind.

Get a closer look at the Browning Citori White Lightning, the latest addition to our #SundayGunday series.

Cooking a whole, plucked pheasant in an air fryer results in a perfectly finished bird with crisp skin and delicious, moist meat.