Are the Latest Broadheads Too Dull?

Are the Latest Broadheads Too Dull?

After proving I could hit with my bow, my father bought me a pack of New Archery Products (NAP) Thunderhead broadheads. Despite his warning, I nicked my finger the first time I twisted one onto my arrow. I learned the hard way that those things—with their replaceable razors-for-blades—were wicked sharp. 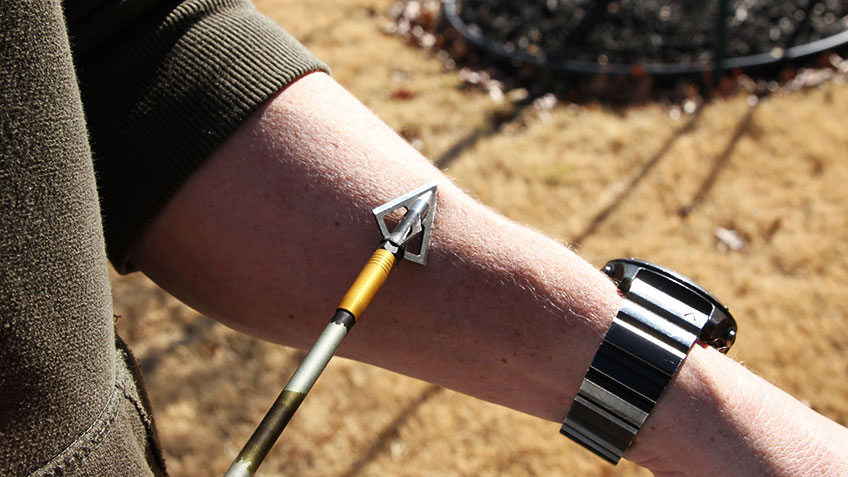 Since that day, I seldom touch any broadhead, preferring instead to use a wrench. Therefore, all these years I just assumed—as most hunters do—that all broadheads come razor-sharp out of the box. Recently, however, I was surprised to find that several of the world’s biggest and most respected broadhead makers have broadheads on shelves right now that are less than razor-sharp. I feel it is my duty to warn you and find out what’s going on.

Are Razor-Sharp Broadheads a Must?
Broadhead blades have traditionally been ground to a near-20-degree edge and honed until they’re razor-sharp for three main reasons. First, according to surgeons, the sharper the blade, the easier it slices through tissue while causing less trauma to it. Because pain receptors don’t sense as much trauma, the body doesn’t release as many coagulants into the bloodstream to clot the wound. Therefore, cuts made with razor blades bleed more. (Just think about how much a tiny shaving cut bleeds.) Blood loss kills animals swiftly and makes them easier to find. Second, sharp blades require less force to cut, so they penetrate better. Third, broadheads can be used once and then either re-sharpened or replaced, so there’s no reason for creating a less sharp but more durable edge, as hunting knife blades are often designed so they don’t have to be constantly sharpened. So yes, broadheads should be razor-sharp. However, as I mentioned above, recently I discovered that not all factory broadheads are. 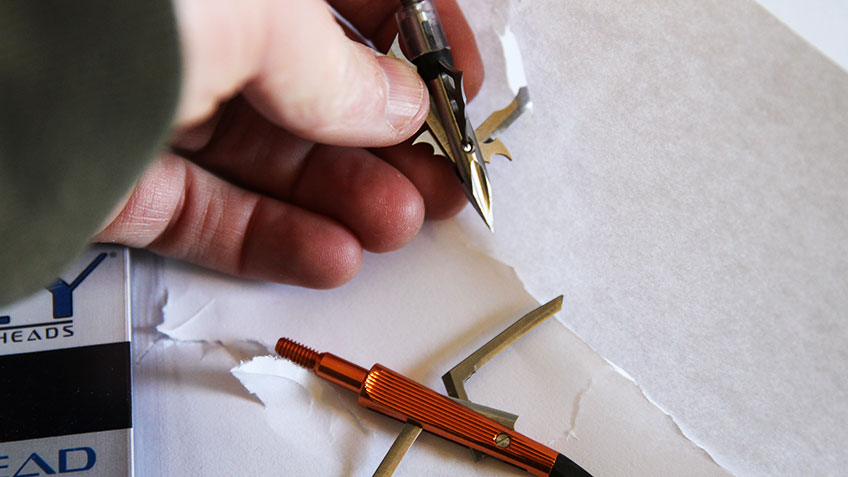 Are Dull Heads Prevalent?
It started when I opened a pack of NAP’s new Killzone SwingFire mechanical broadheads and noticed that its dual blades weren’t very sharp; they wouldn’t shave hair or cut paper without tearing. They simply weren’t the razor-sharp blades for which NAP is known. So I tried several more packs, and they weren’t sharp either. Coincidentally, I next opened a pack of Muzzy’s brand-new HB-Ti Hybrid broadheads, a scary-looking four-blade hybrid head with two thick serrated fixed blades along with two mechanical blades that expand to an incredible 2⅝-inch max cutting diameter. The scalloped, machined tip is almost as sharp as a needle, but the blades are not razors. Company reps said they’d get back to me. Since then, I must report that I killed an axis buck with the HB-Ti Hybrid and it died within 100 yards, despite my arrow not exiting its off-side chest. Despite its lack of sharpness and penetration, it worked! Still, everything I know about broadheads suggests that it should be sharper. Make no mistake, most broadheads on the market—and almost all others from these two brands—are razor sharp, but some are not. Buyers should beware.

What’s Going On Here?
After talking at length with broadhead engineers and some industry insiders, I’ve found several possible explanations. Frank Dougherty, an engineer with Wasp Archery reminded me that the issue is not as simple as one might think. “As bows get faster and faster, manufacturers must continually find a balance between sharpness and durability, or else the sharp edge will just be destroyed the moment it strikes something.”

For the record, all Wasp broadhead blades (made in New Jersey) I’ve sampled recently are razor-sharp. Nonetheless, I believe the problem more likely comes down to economics. Producing scalpel-sharp blades is expensive. But what I’m going to say next may surprise you: We all might be complicit in this scandal. 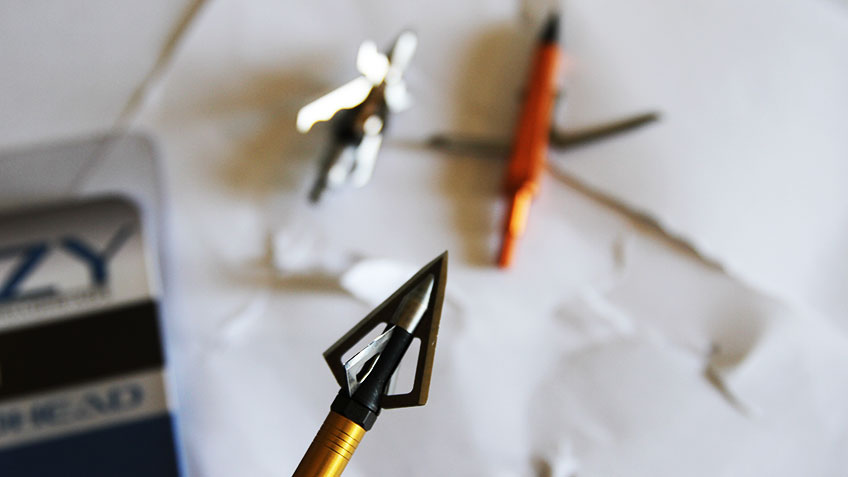 Economics 101
Overly simplified, here’s how it works. Hunting magazines, websites and TV shows hype exciting new products because that’s what turns pages and garners views—not stuff that’s been around for years. So manufacturers choose to come out with new products every year. Those new products have high engineering, production and marketing costs. Consumers, however, already feel they’re paying too much at $39 for three broadheads and are reluctant to pay more, and understandably so. Therefore, big box stores will rarely even stock new products if they’re over a certain price-point. Yet manufacturers’ wages and materials increase as do stockholders’ demand for increased profits, so many broadhead manufactures’ blades get sourced to China. From what I can plainly tell, cheap Chinese blades are much more likely to be dull, probably due to lack of costly finishing steps such as honing.

On the other hand, NAP’s Thunderhead blades (and others) are still made in the United States, and they’re as razor-sharp as they’ve always been. So how do these remain under $39? It’s most likely because they—like most of Muzzy’s broadheads—have been made here for so long that the manufacturing techniques have been refined and made specifically for these mainstay heads. As a result, the blades remain sharp and the prices reasonable. But this is not the case for the broadhead-de-jour that must be marketed in January, mass-produced in March and sold in August to a consumer base that might not be the wiser. The bottom line is that broadhead companies, just like the hunting media and retailers, are trying to turn a buck while bowhunters are trying to save one, but it’s the whitetail bucks that will suffer most. 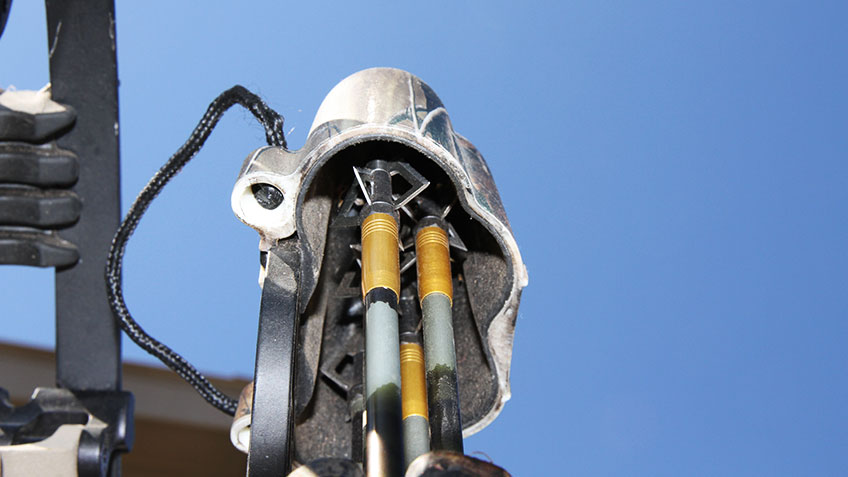 What’s the Solution?
As long as consumers are educated, the free market will win out. If dull broadheads don’t sell, I guarantee they’ll either be improved or replaced soon. As hunters and consumers, we literally hold the master card. After all, the hunter’s code demands we do all we possibly can to ensure quick and humane kills. Using dull broadheads is unacceptable. Therefore, before you decide on a head, buy a proven product, do research or buy a test pack. Test your broadheads on hair, paper or on a stretched rubber band. If they’re not razor-sharp, return them if possible, sharpen them or simply buy something else. After all, among the thousands of dollars we spend on hunting, your broadheads—arguably the single most important piece of gear you own in terms of actually harvesting game—is one of the least expensive, so don’t skimp here. If you’re on a tight budget, consider buying fixed, two-blade heads that you can re-sharpen. Life’s too short and too precious for dull broadheads, so buy smart and buy sharp. We owe at least that much to the game we take.

2022 Rifle of the Year: Savage Impulse

6.8 Western: A Candid Look at the New Cartridge

Aiming A Shotgun? Is That Really Needed? | An Official Journal Of The NRA

Hardware: Prime Inline 5 | An Official Journal Of The NRA

Clean Machine | An Official Journal Of The NRA

END_OF_DOCUMENT_TOKEN_TO_BE_REPLACED

Any way you cut it, this cartridge is a long-range winner. It maintains its energy at distance, and it’s plenty accurate, too.

ATN Corp. sits at the cutting edge of consumer-based thermal technology, and its ThOR 4 Series 640x480 2.5-25x50mm is the best such riflescope it offers.

In celebration of Federal’s 100th Anniversary, Federal will be donating more than $218,000 dollars to local organizations in support of their critical missions.

Federal Ammunition Raises $218,000 for Local Organizations | An Official Journal Of The NRA

Handloads: A Light-Recoiling .32 ACP Practice Round | An Official Journal Of The NRA

Federal Ammunition Raises $218,000 for Local Organizations | An Official Journal Of The NRA