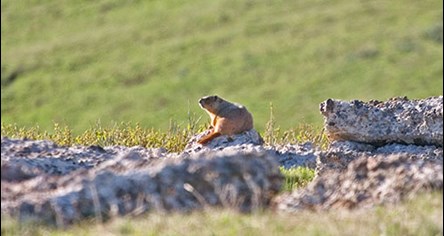 Summer is here, the grass is tall, and the dumb chiselers and prairie dogs have pretty much been shot. What’s a frustrated hunter to do? Paper—though revealing—is a bore to shoot; steel is only a little bit better. As for me, I head to the mountains after whistle pigs, more commonly known as marmots. There are several reasons to like shooting marmots. For one, it’s usually a lot cooler at 8,000 or 9,000 feet. Another is that marmots like rocky outcroppings rather than the grassy areas the other rodents prefer.

There are 15 species of marmots worldwide. They tunnel within the rocks, usually in alpine environments, exposing themselves only when it is pleasant and sunny outside—another plus in the hunting, as far as I am concerned. If it’s too cold, windy or overcast they retreat to their burrows to wait it out. They hibernate throughout the winter. Marmots communicate with one another via loud whistles—hence the nickname “whistle pigs.”

In the eastern U.S. marmots are known as ground hogs and are known to populate farmlands and pastures. Marmots are not as prolific as many other varmints. A really good colony may have no more than 50 inhabitants. It is possible to shoot out a colony, thereby preventing future shooting opportunities. A judicial harvest is suggested. Marmots are considered inedible by most folks, however, I do have a tale from another time.

I was living on a farm many years ago, and the farmer—who wasn’t much of a hunter—had some marmots tearing the heck out of a quarter-acre of his alfalfa. He approached me about helping him rid himself of the crop-deprecating rodents. So one afternoon I set out with a varmint rifle in the alfalfa patch. Presently a pair of young whistle pigs climbed upon a small rock pile. They were pretty innocent, and I was able to pop both of them in the head. I went over to admire my handy work. I saw two young critters, somewhat similar to rabbits that had been dining exclusively on alfalfa. The notion entered my head that there might be a tasty meal here.

After quickly dressing and skinning the rodents I repaired to my primitive little kitchen. I parboiled the marmots, after disjointing them and removing the backstraps. A can of tomato sauce and some Italian spices and some diced onions might turn these wild critters into a nice dinner, so I proceeded to whip up the concoction. I baked them for about 20 minutes at 350 degrees. The Italian sauce sure smelled good! I served them up on a plate and set forth to my dining area.

The first bite was akin to biting into an old-growth 2x4. My teeth barely made an impression on the “meat.” I must have looked something like a rabid dog trying to tear an edible-size piece of meat from the concoction. After a couple of minutes I was able to separate a small piece of meat from bone. Some 30 seconds or so chewing later I was overcome with two facts: One, the meat was about as tender as a rubber swim fin, and, two, it was equally bitter with an overcoming flavor of green alfalfa. I spit out the piece and scraped the rest into the trash can. Then I retrieved a box of macaroni and cheese for my dinner.

The .32-20 Winchester Center Fire: History & Performance | An Official Journal Of The NRA

NRA Family | Use a Horse to Hunt

NRA Family | Can You Hunt Varmints With Handguns?

END_OF_DOCUMENT_TOKEN_TO_BE_REPLACED

The winning artist in each contest receives a $2,000 award and winning artwork is used to produce collector's stamps and other promotional items with sale proceeds benefitting Oregon's fish, wildlife and their habitats.

The latest X-Bolt’s new Ovix camo pattern is suitable for a variety of environments, and its shortened, threaded barrel allows users to mount a suppressor while maintaining a reasonable overall length.

The National Shooting Sports Foundation (NSSF), the firearm industry trade association, revealed that at least 5.4 million people purchased a firearm for the first time in 2021.